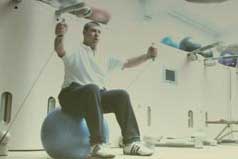 Russell Brand wears bright yellow socks pulled halfway up his calves when he works out. I know this because I’m looking straight at him. The presenter-turned-comedian-turned-Hollywood-actor has just walked into the Primrose Hill-based studio of David Marshall, AKA the Bodydoctor, where we’re both about to have a one-to-one session with his small team of trainers.

I don’t know why I’m surprised (by Brand’s presence, not his socks), Marshall has a long history of treating top celebrities and superstars, and is famous for being the man behind some of the UK’s biggest body transformations, think Sophie Dahl and Lily Allen.

“Diets don’t work. They’re a load of nonsense. And I’ve never known anyone with cellulite that can’t get rid of it with the right kind of exercise”

He has honed the physic of actors like Rachel Weiss, improved the performance of footballers like Rio Ferdinand and toned up entertainers like Ant and Dec. They’re all there on the Bodydoctor website, endorsing his six-week workout and extolling the virtues of his technique.

It’s a programme he’s spent 37 of his 52 years developing, and teaching professionally for the past 20. It’s a prescription of yoga, weights, pilates, cardio and magic that works wonders to bring the body into balance and then back to its natural size.

Marshall and his team aren’t like other trainers who shout ‘ten more!’. They investigate their clients’ limits at the outset, measuring weight, dimensions, body fat, heart/lung function, strength-to-weight ratio – then teach clients their techniques and push them to their individual limits.

“Our ethos is simple,” says Marshall in his gruff north London accent. “People tell us where they want to get to and we show them how to get there quickly, simply and safely, with lasting results.

“It’s what I call working from the inside out. We increase strength, speed, stamina and coordination, and make everyone’s weaknesses gain comparity with their strengths. We teach people how to exercise correctly, what to eat and when to eat it in relation to when they exercise. Because exercise is energy and food is fuel.”

“In the 70s, it was Arnie time with everyone growing muscles and becoming big, bulky and laborious. I wanted to be fast, flexible and strong”

David Marshall talks in rhymes and sound bites all the time which, as well as making sense, also make you laugh. And laughing is key to his workouts. He likes his clients to enjoy their 1.5 hours sessions three times a week, to find the fitness process a pleasant one so that after their intensive six-week programme with him, they’ll continue it in their own time.

There’s more ditties when it comes to nutritional advice. “If you can’t read it, your guts don’t need it,” he says about processed food. “If you need to add, the food is bad. It’s that simple. You need to eat food in its natural state if you want to stay in a natural state.”

Dispelling myths is a speciality of his. “Diets don’t work. If they did, there would be one called ‘The Diet’ and everyone would do it. It’s the biggest load of nonsense. It’s like cellulite. That’s a marketing phrase for fat and water. I’ve never known anyone with cellulite that can’t get rid of it with the right kind of exercise.”

It’s his insistence on telling things how they are and treating everyone the same with his ‘one size fits all’ programme that’s particularly appealing about the Bodydoctor. “I get a lot of people who want to fly me here, there and everywhere to treat them – and sometimes that can be done. But I also run a business, train my trainers and know that if it’s my shift, I’ll absolutely be there to train my clients. They’re my priority.”

Increased demand for his time has led him to expand his offering more recently. After stepping away from providing the fitness at the Chelsea Club in April, he’s now doing the fitness training at Forte Village, the world-leading holiday resort based in Sardinia.

He also opens his second gym in Belgravia this month, is in talks with a leading global spa to provide their onsite fitness training and all while his book, fitness DVD and ‘pocket personal trainer’ (downloadable to your ipod) sell by the thousands.

Then there’s the top private healthcare company looking to incorporate his exercise programme as ‘preventative healthcare’, given Marshall’s programme has reversed Diabetes and ME in clients previously. And the free school’s fitness programme he has developed is currently being trialled in Hackney and Tower Hamlets schools before potentially being rolled out across London and the UK.

With two children, aged 10 and 12 (he is divorced), the children’s programme is particularly close to his heart, given it was as a youngster that he began carving out his fitness guru career. Born and brought up in Kilburn, Marshall was a promising footballer at age 15, determined to go professional before injury struck. By 17, his knee was ‘knobbled’ and he was searching for a way to keep fit. “But it was Arnie time back then with everyone growing muscles and becoming big, bulky and laborious. I wanted to be fast, flexible and strong.”

Discovering yoga showed him a different way. “What struck me was that each exercise had a natural progression into the next,” he says, and he began incorporating that into his exercise regime.

By the 80s, he was training friends as a hobby. By the 90s, demand for his service was so great, he had turned his home into a gym. By 1994, he was training his first celebrity, Dani Behr, and when the Sophie Dahl transformation happened four years later, he was a household name.

It’s an incredible career to look back on, but then Marshall has always been about moving forward. Whether working with schoolchildren, superstars, the sick or the seriously wealthy, his priorities will always be the same – honing bodies, helping people get healthy and always having a laugh.

I’m about to drop my free weights on Chris, my Bodydoctor trainer. That’s how certain I am I can lift no more. He leans over, switches the routine slightly and magic it’s as if I haven’t touched a weight all morning.

It’s funny how, after just a few sessions here, everything I thought I knew about exercising is turned on its head. Take my weights. I’m so exhausted that I assume my whole arm is aching. The reality is it’s just two muscles being worked amongst many others.

I’m also counting obsessed when it comes to exercising; the minutes on the treadmill, the number of sit-ups. After visiting the Bodydoctor, I’ve learned to listen to my body more. Now, rather than focusing on the numbers and minutes, my workouts are more erratic time-wise but I feel a million times better.

I’ve also learnt to vary my routine. We’re told to shake up our exercising but how often does it happen? I’ve always been cardio intensive, but if I’m to boost my balance, body tone and lose pounds, more weight training is a must.

If I can learn this in just a few sessions, it’s little wonder the Bodydoctor gets his results in six weeks. Armed with his book and pocket personal trainer, I’m now committed to taking his medicine.