“The idea was to work with the body by introducing my muscles to new movements in a gentle way. I felt relaxed and not at all stiff the next day” 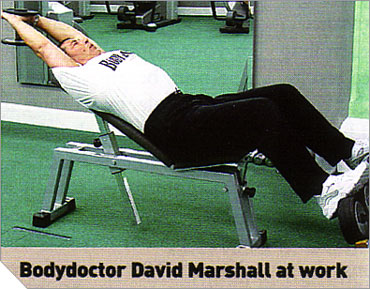 After increasing three dress sizes in three years, 36-year-old Sarah Caswell was feeling desperately unhealthy. A size 18 going on 20, she was tired all day, unable to sleep and constantly coming down with colds and viruses. “I had so little energy and I was putting on weight so easily I began to think something was seriously wrong,” she says. But it was only when she signed up for a nutrition and fitness programme run by David Marshall, known professionally as the Bodydoctor, that Sarah began to see the ways in which her lifestyle was damaging her health.

“I was working long hours and studying at night to be a chartered company secretary,” she says. “I was stressed, moody and exhausted; the last thing I felt like doing after a long commute home was going to the gym.”

Nutrition also took a back seat – Sarah survived on a diet of refined carbohydrates such as pasta, and alcohol. “I lost count of the number of Sunday nights I told myself that things would change on Monday,” she says. “Then I’d go to the opposite extreme and work out five times in one week. My immune system was so low I’d end up with another cold. I wasn’t giving myself a chance.”

When David saw Sarah, he realized that her weight gain, fatigue and general ill-health could be indicative of Syndrome X, a disorder usually associated with inactivity and a diet high in saturated fats and hidden sugars, particularly from refined carbohydrates. A recognized epidemic in the US, Syndrome X – also known as metabolic syndrome – now affects one in five British people, according to researchers at Leeds Metropolitan University. It occurs when the body becomes insulin resistant and is unable to process sugar and fat efficiently.

A vicious circle is set up whereby excess fat (and glucose converted into fat) is stored around the midriff; in the muscles, liver and pancreas. These deposits increase insulin resistance which, in turn, makes it more difficult for the body to deal with glucose and fat. As David puts it: “When we sit around all day and eat badly, our bodies become fat-making machines.”

In addition to insulin resistance, sufferers usually have a cluster of related symptoms, ranging from obesity (particularly a high waist-to-hip ratio) to high blood fat and sugar levels and high blood pressure. In effect, it is an early warning of more serious conditions, such as diabetes and heart disease. However, international trials show that a healthy diet and regular exercise can reverse the condition.

Indeed, Sarah discovered that following the six-week Bodydoctor programme, was a sensible and highly effective way of rebalancing her body. She was in good company. David has used the same philosophy to help celebrities such as Sophie Dahl and Rachel Weisz achieve their svelte physiques, and to take top footballers Rio Ferdinand and Trevor Sinclair to the peak of their strength and fitness.

Sarah’s first workout at David’s north London gym was pitched at 75 per cent of her fitness ability. “The idea was to work with the body by introducing my muscles to new movements in a gentle way,” she says. “Before, I would have gone hell for leather and got tired very quickly, but this time I felt relaxed and not at all stiff the next day.”

Sarah continued to attend the gym three times a week, following David’s unique sequence of 23 resistance and stretching exercises. This works like a yoga sequence, using heat and breath, and with each exercise counterbalancing the previous one in a way that feels natural for the body. According to David, doing more repetitions at a lower resistance is the most efficient way of burning fat, both under the skin and within the muscles. As the body gets stronger, leaner and more flexible, it starts to burn more calories, even when stationary.

David advised Sarah to “turn off the fat supply” by cutting out sugar and replacing refined carbohydrates with those that release sugars more slowly, such as brown rice, wholemeal pasta and bread. He also encouraged her to food-combine – eating carbohydrates before exercise for energy, and protein afterwards to build muscle.

“Almost immediately I noticed a huge change in my energy levels,” says Sarah. “I was able to sleep and stopped getting colds and infections. I could see my muscles becoming more slender and I knew I was getting stronger.”

Sarah admits the programme was hard work, but not half as hard as exercising inefficiently on her own. She ate healthily, reacquainting herself with her favourite fruits and vegetables, but didn’t deny herself any pressing urge for white wine. Now, she says, she is realistic about getting back to her normal weight in a healthy way. “I’m already two sizes smaller and I feel more like the real me than I have for years.”