Dahl turned to personal fitness trainer, The Bodydoctor, and his balanced programme of exercise, together with watching what you eat, and when you eat 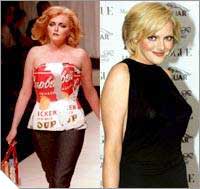 When Dahl first decided to hire a personal fitness trainer back in 1998, she turned to Dave Marshall, known to his clients as “The Bodydoctor”. “It’s a balanced programme of exercise, together with watching what you eat, and when you eat,” says Marshall. It shaves off inches at high speed. Dahl shrank from size 16 to a size 12 and lost a stone.

What’s going on with Sophie Dahl? The woman who was once the incarnation of defiant voluptuous loveliness, who once embodied every woman’s hopes for a diet-less, body-fascist-free tomorrow has lost all her signature excess pounds. When she took to the runway for designer Zac Posen on Monday, clad in a monochrome tux minidress and vertiginous heels, whispered exchanges on the front row of the New York fashion week show concluded that she’d slimmed down to size 10 or even eight. Speculation is rife about what her new body says about Dahl, her emotional state, her love life, and society’s attitude towards fat in general.

“She’s losing her USP (Unique Selling Point),” commented one industry insider. “It was her body that made her so unusual and, to be honest, successful.” Another muttered: “People talked about her having a realistic body shape, but actually, it was an extraordinary body. It was statuesque and incredible. In a way, painfully thin bodies are more achievable than her amazing proportions.” Dahl’s lustrous skin and vibrant hair have also helped her – two things that permanently skinny models tend to sacrifice to maintain their minuscule frames.