Thousands of London school children are set to get a celebrity fitness trainer in a scheme backed by Lily Allen to beat obesity. 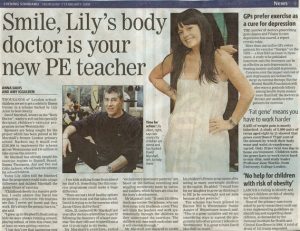 Thousands of London school children are set to get a celebrity fitness trainer in a scheme backed by Lily Allen to beat obesity. David Marshall, known as the “Bodydoctor”, wants to roll out his specially designed children’s exercise programme across Westminster.

Sponsors are being sought for the project which has been piloted at Mr Marshall’s former London primary school. Backers say it would cost £120,000 to implement the scheme across Westminster and £10 million to take across the country. Mr Marshall has already taught his exercise regime to Russell Brand, Emma Thompson, Ant and Dec and Colin Jackson, who all back the scheme for school children.

Today Lily Allen told the Standard that the programme could make a huge difference and dubbed Marshall the Jamie Oliver of exercise. “Childhood obesity is a massive problem. I really admire that David has stepped up-it is heroic. His routines are fun, I never get bored and they work. He’s always the person I turn to,” she said.

“I grew up in Shepherd’s Bush and as kids we were always running around, playing netball, or even kiss chase, but at least we were getting exercise. I just don’t see that happening now- I see kids walking home from school but that’s it. Something like this exercise programme could make a huge difference.

“There are not a lot of healthy options for children to eat and that takes its toll. David is trying to do for exercise what Jamie Oliver did for food.” Allen, 22, contacted Mr Marshall last year after doctors ordered her to get fit following the discovery of a heart murmur. She shed 19lb and dropped from a size 12 to an eight in six weeks.

Mr Marshall’s exercises, called “evolutionary movement patterns” are based on the earliest stretching and wiggling movements made by babies and toddlers, which he says are vital for the body’s development. Mr Marshall said: “It costs £30,000 to teach one trainer the scheme, who can then cover 14 to 18 schools a year. They will train the teachers and work systematically through the children so they understand the exercises. The children will then teach each other and it will cascade through.”

Mr Marshall was inspired to create his children’s fitness programme after seeing so many overweight children in the capital. He added: “I would hate for my daughter to grow up thinking it is OK to be overweight and eat junk because all her peers do.” The scheme has been piloted in Barrow Hill in Westminster. Daniel Astaire of westminister council said: “This is a great initiative and we are considering ways to expand the programme into other primary schools in Westminster. It is great to have David Marshall on board.”