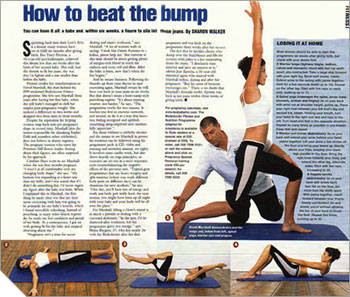 Squeezing back into their Levi’s 501s is a fantasy many women have yet to fulfil six months after giving birth. But Tracy Preston, a 42-year-old psychotherapist, achieved this dream less than six weeks after the birth of her second baby. Not only had she shrunk to fit her jeans, she was also 1st lighter and a size smaller than before the baby.

Preston credits her transformation to David Marshall, the man behind the PPP-endorsed Bodydoctor Fitness programme. She first saw Marshall three years after having her first baby, when she still hadn’t managed to shift her surplus post-pregnancy weight. She noticed a difference in two weeks and dropped two dress sizes in three months.

Despite his reputation for helping women snap back into pre-pregnancy shape in record time, Marshall (also the trainer responsible for shrinking Sophie Dahl and countless other celebrities), does not believe in drastic regimes. The pregnant women who enter his Primrose Hill fitness studio, fussing about their figures, are often surprised by his approach.

Caroline Shaw went to see Marshall when she was four months pregnant. ‘I wasn’t at all comfortable with my changing body shape,’ she says. ‘My bottom was expanding at a faster rate than my belly, and I was scared that if I didn’t do something fast, I’d never regain my figure after the baby was born. When I explained this to Marshall, the first thing he made clear was that my time spent exercising with him was going to be primarily for my baby’s benefit, which I found incredibly refreshing. Instead of preaching, as many other fitness experts do, he made me feel confident and proud of my body. As a consequence, I got on with getting fit for the baby and stopped obsessing about me.’

‘Pregnancy isn’t a time for secret dieting and manic workouts,’ says Marshall. ‘A lot of women walk in saying: ‘I look like Demis Roussos in a kaftan, please help me.’ But exercise at this time should be about getting plenty of oxygen-rich blood to reach the embryo and every cell and fibre. After the baby is born, now that’s when the fun begins.’

And he means business. Following the thumbs up from your doctor to start exercising again, Marshall swears he will have you back in your jeans in six weeks. But that doesn’t mean a boot-camp-style punishing regime. ‘It’s about training smarter, not harder,’ he says. ‘The programme works for two reasons. It teaches you first to exercise correctly and second, to do it in a way that leaves you feeling energised and uplifted, something sleep-deprived new mothers fully appreciate.’

For those without a celebrity income and the means to see Marshall in person, his workout can be followed using his programme pack (a CD, video and training and nutrition manual). It involves some cardio work, but also draws heavily on yoga principles, so exercises are set out in a strict sequence, each counterbalancing the negative effects of the previous one. ‘Typical gym programmes that use heavy weights and split routines (where you work different body parts on different days) can be disastrous for new mothers,’ he says. ‘One day, you’ll have lots of energy and work one body part really hard, the next session, you might have been up all night with your baby and your body will be all over the place.’

For Marshall, lifting a client’s mood is as much a priority as dealing with a wayward abdomen. ‘In the past, I’d be shattered after workouts, but his programme gives you energy,’ says Helen Burgess, 37, who lost nearly 2st with the Bodydoctor after her first pregnancy and was back on the programme three weeks after her second.

The fact that he heckles the clients who slump over the StairMaster and fills his sessions with jokes is a key motivating factor for many. ‘I absolutely hate exercise and have no interest in it,’ admits Jane Epstein, a 35-year-old theatrical agent who trained with Marshall before, during and after her pregnancy. ‘But his sense of humour encourages me.’ There is no doubt that Marshall’s formula works. Epstein was back in her jeans within three weeks of giving birth.

For pregnancy exercises, visit www.bodydoctor.com. The Bodydoctor Fitness and Nutrition Programme adapted for pregnancy is available at £60. Personal training costs £80 per session; for details, call 020 7235 2211.