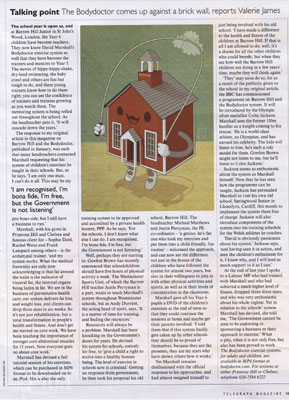 The school year is upon us, and at Barrow Hill Junior in St John’s Wood, London, the Year 6 children have become teachers. They now know David Marshall’s Bodydoctor exercise system so well that they have become the trainers and mentors to Year 5. The moves of hippy-hippy-shake, dry-land swimming, the baby crawl and others are fun but tough to do, and these young trainers know how to do them right; you can see the confidence of trainers and trainees growing as you watch them. The mentoring system is being rolled out throughout the school. As the headteacher puts it, ‘It will cascade down the years.’

The response to my original article in this magazine on Barrow Hill and the Bodydoctor, published in January, was such that many headteachers contacted Marshall requesting that his system of children’s exercises be taught in their schools. But, as he says, ‘I am only one man. I can’t do it all. This may be my pro bono side, but I still have a business to run.’

‘I am recognised, I’m bona fide, I’m free, but the Government is not listening’

Marshall, with his gyms in Primrose Hill and Chelsea and famous client list — Sophie Dahl, Rachel Weisz and Frank Lampard among others — is the archetypal trainer, ‘and my system works. What the medical fraternity are only now acknowledging is that fat around the waist is the indicator of visceral fat, the internal organs being laden in fat. We are in the business of preventative health care; our system delivers fat loss and weight loss, and clients can drop three sizes in six weeks. So it’s not just rehabilitation, but a total transformation in people’s health and fitness. And don’t get me started on core work. We have been teaching the importance of stronger core abdominal muscles for 15 years. Now everyone goes on about core work.’

Marshall has devised a full tutorial session of his exercises, which can be purchased in MP4 format to be downloaded on to an iPod. His is also the only training system to be approved and accredited by a private health insurer, PPP. As he says, ‘For the schools, I don’t know what else I can do. I am recognised, I’m bona fide, I’m free, but the Government is not listening.’

Well, perhaps they are starting to. Gordon Brown has recently announced that schoolchildren should have five hours of physical activity a week. The Westminster Sports Unit, of which the Barrow Hill teacher Justin Perryman is a part, wants to teach Marshall’s system throughout Westminster schools, but as Andy Durrant, the acting head of sport, says, ‘It is a matter of time for training, and finding the resources.’

Resources will always be a problem. Marshall has been knocking on the Government’s doors for years. He devised his system for schools, entirely for free, to ‘give a child a right to evolve into a healthy human being. The level of exercise in schools now is criminal.’ Getting no response from government, he then took his proposal to his old school, Barrow Hill. The headteacher Michael Matthews and Justin Perryman, the PE co-ordinator — ‘a genius, he’s the one who took my exercises and put them into a child-friendly, fun routine’ — welcomed the approach, and can now see the difference, not just in the fitness of the children who have followed the system for almost two years, but also in their willingness to join in with other physical activities and sports, as well as in their levels of concentration in the classroom.

Marshall gave all his Year 6 pupils a DVD of the children’s exercises at the end of term so that they could continue the sessions at home and maybe get their parents involved. ‘I told them that if this system finally gets taken up by other schools they should be so proud of themselves, because they are the pioneers, they are my stars who have shown others how it works.’

Yet Marshall remains disillusioned with the official response to his approaches, and had almost resigned himself to just being involved with his old school. ‘I have made a difference to the health and fitness of the children at Barrow Hill. If that is all I am allowed to do, well, it’s a shame for all the other children who could benefit, but when they see how well the Barrow Hill children are doing in a few years’ time, maybe they will think again.’

‘They’ may soon do so, for as a result of the publicity given to the school in my original article, the BBC has commissioned a programme on Barrow Hill and the Bodydoctor system. It will be introduced by the Olympic silver medallist Cohn Jackson. Marshall sees the former 110m hurdler as a knight coming to his rescue. ‘He is a world-class athlete, an Olympian, and has earned his celebrity. The kids will listen to him, he’s such a role model for them. Gordon Brown might not listen to me, but he’ll listen to Cohn Jackson,’

Jackson seems as enthusiastic about the system as Marshall himself. Now that he has seen how the programme can be taught, Jackson has persuaded Marshall to visit his own old school, Springwood Junior in Lianedyrn, Cardiff, this month to implement the system there free of charge. Jackson will also introduce components of the system into his training schedule for the Welsh athletes he coaches.

‘David is obviously passionate about his system,’ Jackson says, ‘and having seen it in action, and seen the children’s enthusiasm for it, I know why, and I will lend as much support to it as I can.’

At the end of last year I spoke to a Labour MP who had trained with Marshall and who had achieved a much higher level of fitness, dropped three dress sizes, and who was very enthusiastic about his whole regime. Yet in relation to the schools’ system Marshall has devised, she told me, ‘The Government cannot be seen to be endorsing or sponsoring a business or their approach to exercise.’ What a pity, when it is not only free, but also has been proved to work. The Bodydoctor exercise systems, for adults and children, are available in MP4 format at bodydoctor.com. For sessions at either Primrose Hill or Chelsea, telephone 020 7235 2211