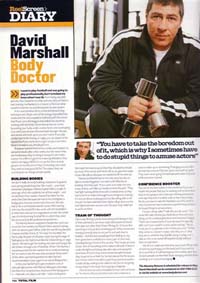 I used to play football and was going to play professionally, but I wrecked my knee when I was 16. From being very little and very fast I became very little and very slow, so I had to start training. I embarked on a mission to find out what would be best for me and developed my own system.

I used to play football and was going to play professionally, but I wrecked my knee when I was 16. From being very little and very fast I became very little and very slow, so I had to start training. I embarked on a mission to find out what would be best for me and developed my own system.

In its most primitive form, conventional exercising technique sees 30 per cent of the energy channelled into results and the rest is wasted in huff and puff. We ensure that 95 per cent of energy is channelled into results by working with the body. Conventional exercise works by putting your body under a stress factor and overloading it so when you recover it’ll come back stronger We just start slowly and work up so you don’t ache. If you play contact sports like boxing or rugby, you can expect to be injured, but if you work out in a gym on your own then there’s no reason you should get hurt.

If anyone trained three times a week, you’d expect to see some results after a few weeks, but the reason they don’t is because they’re doing it wrong. It’s not rocket science. For a film it’s got to be instant gratification, they need to be happy NOW. It’s no use for them to look good in six months time if they’re shooting next week they need to look good NOW. The reason they use us is because we change people quickly.

We don’t really do body building; instead we’re geared up to giving people long, lean flat muscle, your basic swimmers’ physique. I trained Sophie Dahl a couple of years ago when she suddenly lost all that weight and we did that in four weeks. I trained Dani Behr for the series Dani Dares because she had to be a firefighter, a bodyguard, a bounty hunter and a bouncer. She also had to do a commando assault course. After training with me, she scored 95. I also work with the footballers at West Ham and we’re in negotiation to train the whole cast of a forthcoming football film in which they need the actors to look like professional sportsmen.

The Mummy Returns wrapped in September and I was on set for five months, but Rachel Weisz started training with me about a year before while she was filming Beautiful Creatures and also Enemy At The Gates. For the latter she had to play the part of a Russian sniper during the siege of Stalingrad, so she had to look like she’d been living on siege rations. We had to get her looking very lean and hungry like she’d been through a lot of hardship. When The Mummy2 was announced and she wanted me to continue training her so I went to see the executive producer. Since some of the other cast had requested me after Rachel’s recommendation, I put a gym in on site at Shepperton.

In this one, Rachel had to get involved in a lot of intricate fight scenes with Patricia Velasquez, who plays the Mummy’s long lost love. And one of the bad guys in it – Adewale who plays Lock Nah – had to look good.

We made him look so good that they decided he should do most of his scenes with his kit off, so we gave him a pair of pecs like pillows because we wanted to lift his chest up.

Patricia and Rachel had to not only wear, but also to fight in, ancient Egyptian mini-skirts with little bits of braiding. And they said: “If you want us to wear not very many clothes, we’d like our bodies to look the part” They had fight training all the time with a martial artist so they had to be fit to make it through hours of rigorous training. It’s not just about looking good, but also being able to do the job. I’ve been told that these fights will go down as the best fights between women ever, because they really had to work on them.

Obviously, filming is pretty exhausting and training on top of that was hard, so we never expected anyone to knock their pipe out when they’d been filming for 13 hours. But exercising is not just about looking good. When someone’s training correctly, they’re not just fit and well, they’re healthy ? and the buzz people get from feeling on top form gives them confidence in every part of their lives, including being in front of the camera. They’ve got an extra 20 per cent of everything and it makes it all easier. If they’re under the lights and doing take after take and saying the same lines 20 times they need mental strength because they’ve got to be as fresh for the last take as the first as you don’t know which one will be used. If you just sit around in a trailer all day waiting to be called on set you’re not going to stay sharp in the head. You’re going to stagnate.

A lot of time we were scheduled to train with someone on The Mummy Returns, but they had to do a reshoot or were in make-up or something. If hanging around a film set ever becomes an Olympic sport we could win gold. They were never going to hold back and waste 20 grand while someone trained.

You can be the best trainer in the world but if you can’t inspire the people that you’re working with to do it, then they’re not going to do it. Exercise is boring and anyone who says they love it is either a liar or has a very empty life. So you have to take the boredom out of it which is why I sometimes have to become a performing seal and do stupid things to amuse actors.

I’ve got a thing called ‘I talk shit you do work’ The more shit I talk, the less you think about the work your doing, so the workout gets done and everyone’s happy. That’s not a requirement it’s just because I’m naturally daft I can’t put myself in a strait?jacket and say: “Yes sir no sir, you’re a superstar so let me kiss your arse.” When they come in, it doesn’t matter who they are or what they are or whether they feel like doing it today, I can’t take an inch or an ounce off anyone’s body without their co-operation.

My bit is to make sure that they stay tuned: 90 per cent of exercise psychology is in the head and if you wan’t do it, you’ll do it. It’s self serving too. Fortunately, after four sessions people can see their body changing and feel it working, so it’s very encouraging.