Fitness Trainer, The Bodydoctor gets results 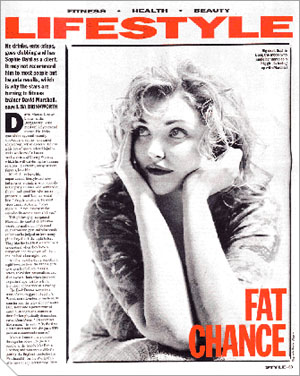 He drinks, eats crisps, goes clubbing and has Sophie Dahl as a client. It may not recommend him to most people but he gets results, which is why the stars are turning to fitness trainer David Marshall, says LISA BRINKWORTH

Carry on Doc: David Marshall David Marshall, better known as the Bodydoctor, is the most unlikely personal trainer. He drinks, goes clubbing, until recently smoked, and admits he is out of shape from lack of exercise. He has a history of sports-related injuries and a weakness for bacon sandwiches and Cheesy Wotsits, which he will eat during his training sessions. His clients, many of them famous, love him. Marshall believes his unpuritanical lifestyle and non- judgmental attitude is what appeals to the party animals who want to be fit and look good but who are not prepared to sacrifice their social life: “People who have the most vices can relate to me,” says Marshall. “You have to make exercise fit around people’s lives.”

This philosophy has gained Marshall the kind of clients who would normally run a thousand miles from the gym and who would rather not be judged on how many pints they drank the night before. They like the fact that Marshall will understand when they have a hangover, and may even tell them that he had a late night, too.

And he must be doing something right because he is the fitness guru to whom footballers, models, actors, television personalities and club owners flock when they need to get in shape fast for a film, television appearance or a casting. The Bodydoctor works in a state-of-the-art gym in St John’s Wood, north London. From here, he transformed the television presenter Dani Behr into a power zone of muscle, strength and stamina in time for her physically demanding series Dani Dares. “I trained her like a man,” he says. “By the time I’d finished with her, she got a 95% pass on a commando course.”

Marshall meets many clients through his social life (he is a regular at the trendy Met Bar in London) and was responsible for getting the England footballer Les Ferdinand fit for the World Cup after he was injured for most of the season. Now he is working on the voluptuous form of the first big supermodel, Sophie Dahl.

Following Marshall’s rigorous exercise and diet regime, Dahl lost 6lb in two weeks. “I’m feeling so much better,” she says. “I have more energy and I’m back down to a size 12. I can fit into my Dolce & Gabbana dress.” The model who shot to fame for being large insists her primary objective is not to lose weight – but given Marshall’s reputation for ridding clients of excess body fat in record time, it shouldn’t be long before we see a trimmer version of the girl who has made her name from her curves.

“I’d love to lose more but my size has become a public fixation,” she says. “This isn’t a fat or thin issue, it’s just about looking the best I can by being healthy and toned. I loved the boxing we did. It’s great for the upper arms and for venting aggression.”

Nicky Clarke, the celebrity hairdresser, tries to squeeze in five early-morning sessions a week with Marshall. “I started putting on fat once I hit 30,” he says. “Now I’m 40, he’s redefined my shape. He’s aggressive in the nicest way and he won’t allow me to let up.”

Marshall admits to being a hard task master,although he says he is merely expanding his clients’ personal boundaries. Daniel Galvin Jr, hair colourist to Paula Abdul and Belinda Carlisle, swears his body has been transformed to become a temple of good health ever since his father begged Marshall to do something about his son’s bulky frame, the result of years of bodybuilding. Bodybuilding with heavy weights is anathema to Marshall, who has been linked with the exercise industry for 25 years, but who previously earned his living in the car trade. He prides himself on lengthening and chiselling. He combines weights and cardiovascular work with exercises based on yoga, and says: “Asking me to bodybuild is like giving me bricks and cement and asking, can you build a wall? The answer is yes. But I’d rather sculpt something beautiful.”

He dismisses intensive localised exercise that shortens muscle, and, instead, works over the whole range of movement. “You should never allow one group of muscles to steal the show during the workout: the rest of the body should play a supporting role,” he says. “It’s like airing your house. You open every window and let the wind blow through.” It took just two months for Marshall to transform Galvin from what he describes as the “body of a bullock to the body of a god”. “I make people cry if I have to,” he admits. “People have offered me money to land one on my chin, but I know what they want to achieve.” Marshall says his dedication to getting others into shape is the reason his own physique leaves a bit to be desired, and that clients should consider it a blessing that he is not one of those personal trainers who uses up the customer’s valuable time showing off their own press-ups and flexing their biceps.

“People say to me, you’re fat, you have all these vices, how can you be a fitness trainer? I say, who do you want to be fit and beautiful, you or me? I’m not one of those monkeys in a tracksuit that looks at themself all day.” The Bodydoctor, who also takes clients on week-long fitness courses at the Las Dunas beach and spa resort in Marbella, where he combines his training with hydrotherapy, spa treatments and tennis, admits he has no formal fitness training, but says he has learnt about fitness the “right way”, after years of being taught the wrong techniques by “those who go along to a weekend fitness course and leave with a certificate that allows them to go out and injure people”.

Once a keen footballer, Marshall suffered a knee injury at 16, followed by a botched operation. He then suffered more injuries at the hands of trainers who, he says, “didn’t know any better”. Determined to improve his strength and flexibility and avoid further injury, he became the guinea pig for his own techniques, which he says are based on common sense, and many of which fly in the face of conventional training wisdom: “Too many trainers work by destroying the body first, and building it up when it’s in recovery mode,” he says. “Exercise must work with the body. It’s about what feels right.”

After a while, clients say they begin to notice there is something quite magical about their training sessions with the Bodydoctor, not least because he can make exercise seem effortless. Certainly, he will distract clients with his constant stream of jokes and clowning around. “I take the drudgery out of it by being a performing seal, but I never take my eye off the ball.” “He’s so entertaining that you don’t realise how boring exercise really is,” says Dahl. “Most gyms are full of surgically enhanced, expensively dressed women checking each other out. David puts the fun into things.”

His language is not at all typical of the brutal commands barked out by most fitness trainers. His key words are serenity, tranquillity and activity. “Everyone has their own wings: I show people how to flap them and fly to their level,” says Marshall. He is much more than just a personal trainer. In the past three years he has integrated healing into his programme. As he works with clients, he is instinctively aware of blocked energy and stress points. He will stop someone mid-workout and, with the laying on of hands, apply pressure to the body, causing a sensation of heat and tingling. “Close your eyes, empty your mind and let me take away your pain,” Marshall chants like a Tibetan monk. He talks about opening chakras and says he often sees auras. This may sound strange coming from this roughly spoken bleached-blond 41-year-old Londoner, but clients swear by his healing skills. It was Robbie Williams who first pointed out that Marshall had healing hands after feeling tremendous heat when training with him. “It feels a bit like the reiki method. It’s quite extraordinary,” says Dahl, whose back pain Marshall relieves. David Ginola went to Marshall with a calf injury. “I’ve never been more injured in my life,” he says. “David massaged it and I felt this intense heat. I was completely healed. He got me right back on the pitch.”

Marshall does not believe in “mumbo jumbo”, and plays down his healing abilities. “It has nothing to do with faith. I merely set off the body’s own healing system,” he says. “The body becomes like a blocked pipe: you have to pull out the plunger to get the energy moving. It’s more effective than an ultrasound machine, and it doesn’t cost £6,000.” He also offered his healing services free to the entire West Ham football team, which he has supported all his life. “They chose to stay in the dark ages,” he says scathingly. “They didn’t qualify for Europe and they could have.”

Marshall is fast converting more people into believing that Bodydoctor fitness will make the world a healthier place. “People must come here with an open mind and a good heart. If you’re sceptical or under duress, you just won’t get the benefits.” David Marshall charges £50 per session, but the healing is free. Call 020 7235 2211 or visit his website at www.bodydoctor.com