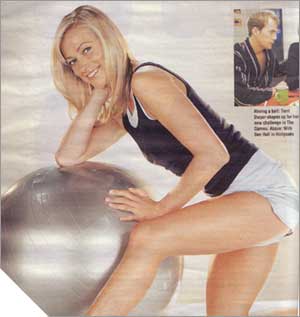 It has been the task of David Marshall, the show’s body doctor’, to raise the contestants’ fitness levels over the past two months. The UK’s top fitness expert, who has previously worked with celebrities such as David Ginola and Sophie Dahl, has been helping the ten participants to improve their performance levels. He says, ‘Because each of the separate events will make so many contradictory demands on the body, it’s my job to make sure that they can cope physically. We have 90-minute sessions where we do a variety of exercises, working with weights, working on abdominal strength and using the principles of yoga to increase flexibility.

‘I’ve also talked to them about diet, and advised them that, before training, they need to eat plenty of carbohydrates – brown rice, pasta and fibrous vegetables – and, after training, they need to replenish their bodies with protein and eat lots of fish, lean meat and vegetables. It’s hard work – none of them is swarming around: So who does Marshall think will win? ‘Well, all of them are pretty fit; he says, ‘but Harvey is very, very fit and he’s 16 or 18 years younger than some of them, so I think he’ll do very well. Jean-Christophe and James are in good shape, too, and, as far as the women are concerned, I think Mel C will do really well – she’s doing this because she genuinely loves the buzz of exercise. But we’ll see what happens.’