From size 12 to size 8 in six weeks, through a special combination of weight training and cardiovascular (aerobic) work 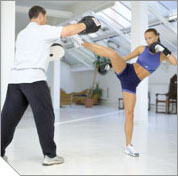 Rachel Weisz, star of The Mummy, has never been what you could call overweight, or even a big girl, but when she took on a role in Enemy at the Gates, a second-world-war epic with Jude Law and Joseph Fiennes, out later this year, the part called for her to lose weight. “I play a sniper living on siege rations, for which I had to be as lean as possible,” says Weisz.

If she was American, Weisz would probably have turned to the nutritionist du jour and embarked on a restrictive eating regime. But despite her Hollywood success, Weisz is still a sensible north London girl at heart, and doesn’t believe in crash dieting. Besides, as she points out, “I needed the energy and strength to carry a heavy rifle on my back for hours during filming.” So she called in trainer David Marshall, known as the Bodydoctor, who safely took her from size 12 to size 8 in six weeks, through a special combination of weight training and cardiovascular (aerobic) work. “David’s is the only form of exercise I’ve ever been able to stick to,” she says.

Currently, Marshall is dividing his time between his gym in London’s Primrose Hill and Shepperton Film Studios, where Weisz is filming the sequel to The Mummy. Marshall has been contracted by Universal Studios to install a gym at Shepperton, where he is putting Weisz and the rest of the cast through their paces for the duration of filming. For her role as the adventure-seeking Egyptologist, the actress is particularly concentrating on increasing her stamina for the fight scenes by participating in strenuous workouts and boxing rounds.

And, as she has discovered, size is no measure of strength, and being fit and strong doesn’t have to mean being big. “I was worried about increasing bulk, but I’ve just become amazingly fit and, as my friends have all noticed, much smaller,” she says.

I discovered this for myself last year, when I had three months to lose weight so I could pass as a model for the BBC’s MacIntyre Undercover documentary expose on the modelling industry. Although I had always been convinced that weight training makes you muscle-bound, Marshall’s technique got me down from a size 12 to a size 8, with a stomach flatter than a pancake and the hips of a teenager.

A former footballer whose career was cut short by injury, Marshall explains that by working the muscles at the right intensity, the body is encouraged to burn the fat that is stored within the muscles themselves, so they become more compact. He also believes that to create a long, lean look, the sequence in which exercises are done is as important as the exercises themselves. His routine is designed so that the inevitable contracting, or shortening, of the muscle that occurs when it is worked is counterbalanced by the next exercise in the sequence – so the secondary effect of each exercise is to lengthen the muscle that has just been contracted. That’s what Marshall refers to as “cleaning as you go”, a practice that also eliminates post-workout muscle aches, however strenuous the workout.

When he first made a splash on the personal training circuit some years ago, his techniques flew in the face of conventional wisdom. Now many of his basic principles have become fitness- industry buzz words – such as his emphasis on isolating the transverse abdominus, the deepest abdominal muscle, which supports the whole body and builds the strong “core” that Marshall believes is essential for fitness (as well as a flat stomach). And the good news for all those who, like me, have no intention of going anywhere near the pain barrier is that Marshall believes that exercise doesn’t have to hurt to be effective and opts for steady, moderate cardiovascular work that will encourage the body to burn fat without putting the joints under strain. He’s a stickler for technique, and says that only the muscle being worked should feel any pressure – the rest of the body, and in particular the neck, should remain relaxed.

But unlike me and Rachel Weisz, Marshall’s typical client has much more weight to lose. New mothers, brides-to-be and out-of-shape business executives arrive at his gym with a physical ideal, which he says they can all achieve if they put in the work. Alain Kemeny, owner of Hampstead’s trendy Toast restaurant, has gone from a 44in to a 34in waist in 15 weeks. Ken Bates, chairman of Chelsea Football Club, was so impressed when Marshall helped him lose weight for the first time in his life that he’s going into partnership with him to open a Bodydoctor gym in Chelsea Village later this year.

So what do you do if you want a Hollywood body, but you can’t afford training sessions at £75 a pop? You can buy the Bodydoctor fitness programme by mail order and take it to the gym with you. Of course, most people work a lot harder when they’ve got a personal trainer by their side. Getting results on your own requires a little more dedication.