Weight Loss and a Flat Stomach, working out with the Bodydoctor personal trainer 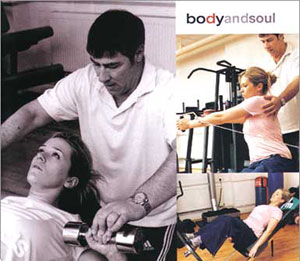 To be honest,” admits Edith Bowman, 28. “I don’t know how I got through the last 1 of breakfast TV.” Like most of us, she has found that, as she nears the end of her twenties, burning the candle at both ends is no longer feasible. “I’m not the type of person to stay in and have early nights – and I like a drink. Plus, working at Radio 1, I go to four or five gigs a week. It’s heaven, but I try to counterbalance it by doing good stuff for body and mind.” Regular exercise plays a big part in finding a balance: “I discovered going to the gym is almost better than sleeping for a couple of hours.” She regularly works out with The Bodydoctor, David Marshall, and the team at his Primrose Hill gym in London. He is famous for slimming down Sophie Dahl from a 16 to a 12, and training a broad range of stars, including Rachel Weisz, Ant and Dec, the entire West Ham football team.

Edith, how often do you exercise and when do you squeeze it in?

I try to go in the mornings, two or three times a week. If I’m working early on the breakfast show, or back in the Rise days, I’d go after work, at about 10 am Exercise puts me in a good state of mind if I have things to do but, if the day’s free, I’ll go home and have a kip. I totally understand why people go to the gym in the morning. Boxing is a brilliant start to the day, to get rid of built up aggression. I love it so much, a mate bought me a punch bag for my back garden!

What’s your motivation on a cold morning?

It’s amazing how much you feel the benefit of exercise, in muscle tone, energy and increased staying power – but it’s a catch 22. The last thing I want to do when I’m tired is go to the gym, but it’s fine once I’m exercising. Afterwards, I have a real sense of achievement. I’ve realised it’s about educating yourself to the good effects exercise has on the body and mind, and remembering the benefits when you wake up and think “I’ll phone and say I can’t make it.”

Have you noticed many physical changes?

It scared me slightly at first because a bit of weight because of the muscle I’d built up. It’s not dramatic, you dont feel heavier, but you definitely notice a difference in tone and shape. But it’s got rid of my dimply arms. Also, it has improved my snowboarding staying power.

Have you altered your diet?

David has a diet plan that involves not mixing protein and carbs and cutting down on sugar but, because of my job its not something I’ve stuck to. I’m never able to choose what I want to eat on location, plus breakfast time is 5am and lunch is 10 am, the exercise is less about weight loss – I actually gained weight as my muscle increased – it is more about toning up and being able to eat what I want.

What has been the hardest thing to cut down on?

Alcohol. I’m a Jack Daniels and Coke girl, but I’ve started to drink vodka and cranberry. At least it sounds healthier.

Is it late to bed and early to rise?

For the Saturday show, we have to be there at 8.30am for a 10am start. Of course, we’ve been out every Friday night since we started, but it seems to be working. The night before we broadcast at the FA Cup final in Cardiff was mad. Colin [Murray, Edith’s Radio 1 co presenter] got everyone back to his room and it was about four o’clock when we finally got to bed. We were quite worried about the next morning’s show – as we had lots of technical problems – but the producer sent a letter saying he thought it was wicked. Now we figure we need to stay out until 4am every week.

Usually a mug of Starbucks coffee and a bottle of Lucozade.

What are the benefits of having a personal trainer?

Going to the gym on my own is a drag. I need that push of having someone there, as well as him monitoring me, and showing me how to do things properly. It’s amazing, David will watch me and if I move something in the wrong way, he’ll adjust me into the right position. I can instantly feel the difference. I’ve also realised how lazy I was when I went to a paid membership gym. Even when I said, “I’m going to be really good today,” I just wandered around watching MTV. Training has also helped me recover from a ligament tear in my ankle.

To have a really flat stomach and feel comfortable wearing short skirts – my legs are my big thing. I used to do yoga, so I’d love to have time to do yoga once a week and training twice a week.

What are your favourite work-out tunes?

Junior Senior and the Foo Fighters. It’s wicked working out to dance music or fast rock, especially when I’m boxing. I’ve always wanted to put the Rocky soundtrack on while boxing, but I’ve never had the guts to do it – yet.

“Eat complex carbohydrates, including fibrous vegetables such as celery or broccoli, or jacket potatoes ad whole grains, before you exercise,” advises David Marshall “Giving the body what it needs when it needs it, ensures food is utilised to the full. Remembar food is fuel. After exercise, stick to protein to replenish reserves.”

Cut out unnecessary starch (pasta white bread, white rice) from your diet as much as possible. “It turns into sugar in the digestive system, and upsets sugar levels so, although it’s a satisfying quick fix, you’ll soon feel hungry again.” David believes this is the key factor in the western world’s weight problems.

Don’t diet. “If they worked, there would be one called `the diet’ and every-one would be thin. If the body doesn’t have sufficient calories, it turns to the muscle for food. Muscle is lost and so is its fat-burning ability. As muscle weighs more than fat, you’ll lose weight, but ft fat that takes up the space, so you’ll neither shrink nor look toned.”

Never drink alcohol on an empty stomach, it’s not good for the liver or the lining of the stomach. Eat foods rich in nutrients. Choose a good carbohydrate, such as brown rice or wholegrain bread, with plenty of vegetables then, if moderation goes out the window, at least there’s a foundation to absorb the toxins.

After a night out or a stressful time, replenish the body with plenty of fruit and vegetables. Unless you’re lucky enough to eat mainly organic foods, take a daily multivitamin to boost food nutrition.

Listen to your body. If you’re so tired you cannot keep your eyes open, you are overdoing it.

For every alcoholic drink you consume, have a glass of water. Not 10 at the end of the night; alternate alcohol and water. The water will flush out the alcohol, combating dehydration and limiting the effects of a hangover. Lots of water will also encourage the alcohol to speed faster round your system, so you’ll feel the effects quicker, spend less money, and go home that bit earlier.

If it’s too late for moderation, try a spoon of Andrews Liver Salts or an Alka Seltzer before bedtime or when you wake up. For information, call 020 7586 0101 or visit bodydoctorfitness.com. Training sessions cost from £60 (Bournemouth £80 (London). A home fitness programme costs £35 to’In Style’ readers, a saving of £25.

Working out with The Body Doctor

“It’s a one-size-fits-all programme,” declares David Marshall aka The Body Doctor, “based on physiology (I developed it with an osteopath) to work anyone’s body – celebrity or not:” His focus on the whole body includes correct positioning, with each exercise counterbalancing the previous to provide a stretch, and working in a full range of movements to improve strength, flexibility and endurance. “When your body co-operates, it will respond to all the energy and effort you put in, ensuring a return on your time investment.”

Edith’s work-out starts with a warm-up (on a bike, step machine or treadmill) for 10 minutes, followed by weighted exercises for the upper body, then lower body (including lunges, squats and leg lifts) and a series of ab curls. “Aim for muscular exhaustion, between 20 and 25 repetitions. If this is a struggle, reduce the weight – you are building muscle bulk not burning fat,” he advises. She finishes with a 30minute cardiovascular session, again on a bike, treadmill or step machine. “This is the part I find really hard and boring,” admits Edith. “I’ve got a short attention span, so if I’m on the bike, I’ll take a book. It’s funny, I’ll sit and read while working out.”

HOW TO GET RESULTS

There are no variables in a fitness programme, it’s a set routine adjusted as you progress -: you just need to put in the time. “Do it and you’ll see results,” promises Marshall. He recommends an hour and 30 minutes, three times a week, but reassures it isn’t all about sweat and pain. “No one gets fit watching a video, you have to do the work, but it’s not about killing yourself, it should fit into your life and be fun. It should give you energy, not deplete it. If you feel exhausted afterwards, you’re doing something wrong:” The Body Doctor David Marshall has devised a programme for Edith that combines weighted exercises with cardiovascular work-outs and boxing

Despite his success with Sophie Dahl, Marshall insists slimming is a by-product of the health-promoting routine: “The aim is to make the muscle as lean as possible so your body’s fat-burning potential is at its peak.” When it comes to dropping a dress size, he says, “don’t obsess over weight- or calorie-controlled diets. Be realistic about what your body frame is – if you exercise and eat the right foods, you can lose all your excess weight, dropping the sizes to achieve your best possible shape. Scales can lie but a tape measure can’t.”