THE EXERCISE PROGRAMME THAT WORKS

The Bodydoctor exercise programme you can follow at home or in the gym. 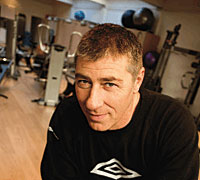 Every January, hundreds of thousands of us pledge to get fit. It is the busiest time of the year for health clubs all over the UK. According to the Health Clubs Benchmark survey by Deloitte, in January 2006 more than 100,000 people joined a gym, compared to an average of 63,500 per month across the rest of the year. But for too many of us, the new year’s resolutions are short-lived. Within a couple of months, our trainers are gathering dust and we’ve forgotten about the direct debits still leaving our accounts.

Stuart Biddle, professor of exercise and sports psychology at Loughborough University, has researched why people do or do not exercise. He found that lack of time, work and family commitments, boredom with their exercise regime and lack of support from gym staff lead most to give up. He also believes people are exercising for the wrong reasons. To stick to a long-term plan, you need to be intrinsically motivated’ exercising for fun and because it makes you feel good about yourself. It won’t last if you’re doing it to look better or under pressure from your partner.

‘Exercise should be done as a valuable thing in its own right rather than to put on a bikini next week,’ says Biddle. ‘That is a short-term goal and you’re likely to go back to your old habits as soon as the holiday is over.’

But David Marshall, aka the Bodydoctor, says the reason so many people give up their new year fitness regime is because it doesn’t work. ‘The one commodity no-one has in abundance is time, so if you do something that’s not working, you stop,’ he says. According to Marshall, most people who go to the gym are doing it all wrong. Consequently, they don’t get the results they’re looking for and they give up.

‘It’s the quality not the quantity,’ says Marshall. ‘There’s a massive difference between doing it properly and not. People who don’t exercise properly waste a lot of time on huff and puff and risk injury.’

Marshall, who has whipped hundreds of clients into shape including model Sophie Dahl, captains of industry and, most recently, singer Lily Allen, seems to have hit on a formula that works. Dahl, once a voluptuous size 18, dropped three dress sizes and lost more than five inches from her waist in just six weeks.’The reason clients stick to my programme is because it works,’ says Marshall. ‘It has stood the test of time.’

With such impressive results, I was curious to test his formula for myself. Soon after being welcomed into his ‘temple of health, where miracles are performed’, I am put to work on a stepper machine to warm up my lower body. Unlike my usual, self-prescribed gym routine, which consists of a gentle bike ride and a dose of EastEnders, this is already making me work up a sweat. After 10 long and gruelling minutes, I’m moved to a rowing machine to work my upper body. Then it’s on to the weight training exercises and stomach routine.

Like most conventional exercise programmes, the Bodydoctor method combines cardiovascular activity, weight training and stretching, but its secret formula is in the why, when and how. Marshall explains that when you contract a muscle, the body’s inclination is then to stretch it out. But most programmes call for a series of sequential contraction exercises. Stretching only comes at the end when, Marshall believes, it’s too late and the damage has been done. With the Bodydoctor workout, you stretch your muscles as you work through the exercises. Marshall calls this ‘cleaning as you go’. The 22-exercise workout must therefore be followed in sequence. The other difference is that rather than doing three sets of 10 or 12 repetitions, which apparently bulks up the body, each exercise is repeated 20 to 25 times until the muscle is exhausted. This, says Marshall, burns the fat within it, resulting in long, lean muscles.

Following the weight training exercise and stomach routine, my exhausted muscles are now primed to burn maximum fat, so it’s back to the cardiovascular machines. Marshall advises finishing the exercise programme with 15 to 45 minutes of cardiovascular work at a reasonable intensity’65 to 75 per cent of your heart rate.

Although many of his clients come to him seeking a fantastic body, this is just a by-product, says Marshall. ‘The Bodydoctor programme doesn’t target fat, weight loss, strength building or speed ‘it is designed to bring your whole body back into balance,’ he explains. ‘The most motivational thing is that you get your health back’you can’t run a business from a sick bed and definitely not from six foot underground. For directors, productivity is king. If you have a healthy body, you have a healthy mind. The more directors can do for themselves, the more they can do for their business.’

Since Daryl Clarke, managing director of Matrix Display Systems, started working out with Marshall in March, he has been sleeping better, making him more productive in the office and better able to cope with stress.

‘I went to the Bodydoctor because I was after results,’ says Clarke. ‘I do two concentrated sessions per week. It’s not cheap but it’s better value for money pro rata. I’ve had personal trainers before and there is no comparison. After my first 20 sessions I had lost four inches off my waist and 25 per cent of my body fat.’

Once clients have followed the initial six-week programme, Marshall reckons they only need to do one session a week’good news for busy directors. ‘When your body is in balance’which it loves’it takes a lot to get it out of balance again,’ he explains. He stresses that he is a teacher, not a trainer. ‘We teach people how to exercise so they can go away and do it themselves,’ he says.

Of course, it may be difficult for everyone to get to Marshall’s temple of health (based in Primrose Hill and Chelsea) so he has published a DVD and book of the Bodydoctor programme so you can follow it yourself at home or in the gym. Or you can buy the Bodydoctor Ebook. To book a session call 020 7235 2211.