BURN FAT AT THE BODYDOCTOR GYM

The Bodydoctor knows a thing or two about fitness and how to get what we all want from a gym: a good body. 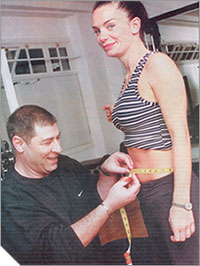 Get-fit fads and newfangled routines are all very well but when it comes to exercise – and especially sweating – most of us want one thing: Results. ANNA MAGEE gets moving with one of London’s hottest (and most effective) fitness sensations.

It’s hard enough to forego Eastenders and get off the sofa without some fast-talking Londoner telling you that 70% of the effort most people put in at gyms is wasted. David Marshall, alias The Bodydoctor can’t stress that enough. He tempers my skepticism with startling before and after shots. The lady that went from a size 24 to a size 12 a in matter of months, the public shrinking of voluptuous model Sophie Dahl a couple of years ago or Zara who dropped a dress size and doubled her energy in eight weeks (“And joy! I haven’t lost my boobs.”). This guy, it seems knows a thing or two about fitness and how to get what we all want from a gym: a good body. Thankfully, if you can’t cross the pond thrice weekly to workout one-on-one in his exclusive North London gym, Marshall has just launched a video, audio and book in which all his secrets as well as the workout to end all your workouts (and apparently all your spare tyre worries forever) are revealed.

He’s worlds away from the archetypal testosterone-charged trainer, “I’m not one of those monkeys in a tracksuit, too busy looking at themselves to notice what you’re doing”. Relinquishing the smug-o-babble of most ‘health pros’, he takes a blase approach to lifestyle quirks like drinking or partying. “If you want to be a monk, go and live in a monastery. If your body has activity and you feed it well and condition it properly, that almost gives you the right to do things that aren’t necessarily that good for you”. With his constant stream of impressions, jokes faux accents he’s more like Tommy Cooper than Arnold Schwarzenegger. The repertoire detracts from the punishing paces so his clients – be they glittering A-lister or ‘real person’- can’t get enough of him. Half-man half-goon he may be, but Marshall’s results are stunning. He transformed actress Rachel Weisz from a size 12 to a size 8 in six weeks for Enemy At The Gates. So pleased was the star with his training, she convinced the producers of The Mummy Returns (in which she starred) to have Marshall install a gym at the Shepparton studios and train the whole cast! Footballers (he trained the West Ham football team last year) models, actors – anyone needing to get fit and in shape quickly – flock to him. “Dervla Kirwan is an actress, not a runner. But after being on our programme for six weeks, she ran the British 10k Charity Run in 48 minutes. Faye Tozer from Steps did it in 53 minutes.”

WHY WHAT YOU’RE DOING IS PROBABLY WRONG

A bit of a gym refugee myself, I had wondered why years of sweating and straining hadn’t resulted in a washboard stomach, buns of steel and a part on Baywatch. According to Marshall, I just wasn’t doing it right, “It’s not about training harder, it’s about training smarter.” Those who’ve dropped a dress size or three on his programme may consider The Bodydoctor god-sent but in terms of conventional exercise wisdom he’s more maverick than messiah. “Forget everything you’ve ever been told about how to exercise”, he says before our workout. “We work with the body, not against it. Conventional exercise gives the body a stress factor it cannot cope with and when it’s recovering – so goes the theory – it will come back stronger. The over-stress causes soreness and the focus in one area – aerobic, strength, speed – means another area suffers.” The result is imbalance and health problems, not to mention the disheartening effect of sore, stiff muscles. “Our program doesn’t target a single area. It works on achieving balance in the body that results in better health. Looking fantastic is just a by-product.”

The usual elements are there: weight training, cardiovascular activity and stretching. Like most, Marshall extols the virtues of building muscle in order to burn fat. But the order, the how and the why of conventional routines is all wrong, he says. “All that ‘Three sets of eight or ten stuff'” – what most of us get told in gyms – “gives you a slow, bulky, laborious body. You gain strength but you lose flexibility, speed and balance.” Conventional weight training won’t promote a lithe, toned body nor the agility that comes with real health and fitness. Surprisingly, Marshall’s workout – which is the same for everyone and combines weights with a pretty punishing floor routine including abdominal and hip movements to introduce you to muscles you didn’t know you had – involves 25 non-stop repetitions and only one set of each. And all with very slow, precise movements. “You train the muscle to exhaustion, creating the right amount of heat to burn the fat within it.” The idea is to target and minimize the fat in the muscle. As muscle uses fat for fuel, the leaner it gets the more efficiently it burns that fat. According to Marshall, the combination of heat, controlled breath (another important element), movement and resistance adds to fat-burning. The result is small, lean and long muscles, not bulky or chunky ones.

Sequence is important. “It’s like cooking, you might have the right ingredients and equipment but if you don’t put it together in the right order, you stuff it up.” That means no stretching needed between exercises, you stretch while you exercise instead. Where one exercise works one muscle, the next will work it’s opposite, therefore stretching the one worked previously. “It’s like cleaning as you go instead of being left with a big mess at the end.”

The Bodydoctor knows a thing or two about fitness and how to get what we all want from a gym: a good body. 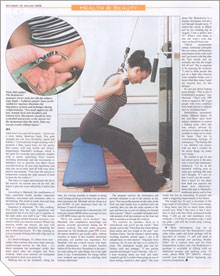 “We’re not trainers, we’re teachers,” says Marshall, who emphasizes knowledge and precise, accurate movements during the 90 minute workout. The mail order program, sponsored by UK healthcare giant PPP covers all aspects needed to get results safely, without soreness or injury. It also \s nutritional principles, yet another key ingredient. For Marshall, who has worked closely with high-profile nutritionists – like Gudrun Jonsson author of Gut Reaction (Vermilion) £9.99 in the past – not only eating the right things, but at the right times is key. Carbohydrates for energy before your workout and protein for refueling tired muscles afterwards. The program conveys the information and provides resources to put it into practice at any gym. “You can see the exercises on the video, in the book you read exactly how to perform each one correctly, then you take the audio cassette to the gym and have me in your ear talking you through each exercise.” There’s even a portable laminated sheet with pictures of all the exercises on the front and back to prompt you through the workout. “It’s exercise by numbers. Stick to it meticulously and you’ll get the results.”It’s about technique, it’s about form and – unlike other routines that stress high intensity cardiovascular activity for ‘the burn’ – it’s about moderate but prolonged cardio that takes place after the weights and floor workout, when your muscles are exhausted and poised to burn even more fat. Walking fast on the treadmill, riding the bike, the rowing machine or stepper or doing some boxing can all get your heart rate up, but to burn maximum fat, Marshall advises doing it at just 65-80% of your maximum heart rate for between 15 and 45 minutes. Your maximum heart rate is theoretically 220 beats per minute (BPM) minus your age for men or 226 BPM minus age for women.

“I had done the whole dieting thing before and lost weight in the past,” says Suzanne Guest, “but the minute I started eating anything remotely normal again, I put it all straight back on with interest.” Originally from Limerick, the 24 year old had yo-yo dieted for years. The subsequent weight gain had her feeling unfit and unhappy, “I was getting married and though I wasn’t that big – size 14 – I kept moaning about my body and really wanted to get fit. I couldn’t bear going on one of those boring, restrictive diets again.” She read about The Bodydoctor in The Sunday Times and put a call through straight away. “I started the course in March and by my wedding day in August, I was a perfect size 10.” What’s even better is that she wasn’t even that strict on herself food wise. “David recommends certain nutritional principles like not eating carbohydrates and proteins at the same meal but I got bored with that after the first month and ate normally and still, the weight fell off me!” She is surprised to be enjoying the workout; “I used to think people that got on a high after exercise were complete freaks, now I know what they mean. I need my exercise now, it’s like therapy.”

It’s not just about looking good though. “This is also a rehabilitation program,” says Marshall. “That’s why PPP chose to support it. We’ve got people with every condition from heart disease to arthritis and we’ve helped them.”

Dublin-born investment banker Graham James, 39 has had three open heart surgery operations to correct a leaking aortic valve and was always advised by doctors to exercise as little as possible in order not to strain his heart. That led to overwhelming feelings of inadequacy, “The feeling that I was different was always with me, that I couldn’t do the sporty things my mates were doing.” He wanted to get fit and had joined gyms in the past, only to have that inadequacy reinforced. “I’d be on the treadmill walking next to some guy sprinting like mad and I thought, ‘If I can’t do that, I won’t get the results’. Now I know it’s not about how hard you exercise but about how effectively.” James did stick to Marshall’s nutritional advice and in four weeks has lost an astounding 16 pounds and made a staggering improvement to his fitness. The weight loss, he says is secondary to the huge surge of self-esteem. “I have more energy, I sleep better and feel so much better about myself now. What I like most is that I don’t have to deal with that whole puritanical health thing. I still go out and misbehave every weekend – I’m Irish for goodness sake, I need my pints – and still the results keep coming. I’m hooked.”

More information: Log on to www.bodydoctor.com. The Bodydoctor’s video, audio and book package will be available by mail order from the website. The tape measure never lies, the scales can, says Marshall. Muscle can weigh more than fat so you may actually lose inches and look better than ever but the scales won’t show a big change.